Last October Saris began taking orders for a hub update device for their 2.4 wireless power meters.  Typically the firmware in the electronic power measuring hubs never needs updates, so this is a special gizmo.  The update?  The hub transmissions are changed to include both the private Saris network and the ANT+ Sport network.

For many PT wireless users this falls in the “so what” category.  It doesn’t make the hub work any better with the existing PT CPU.  What it will do, however, is enable 3rd party ANT+ Sport devices to receive PT transmissions in a recognizable format.  The Garmin 705 is one such device, and others could possibly include the wireless SRM receiver,  iBike/iAero, and the forthcoming unit from Quark.

Combining the power data of the PT with other devices has several potential benefits.  The iAero/PT combo has great potential for roadies in optimizing bike position through reduced air drag.  The Quark is supposed to be linux based and open source, allowing customized algorithms & displays for the extreme geek.  The 705 is a GPS mapping unit as well as hosting all the training utility of the 305 Edge units – for off-road GPS users, the combination with power is sexy indeed!

Finally the updater began shipping in Dec.  The actual update is as easy as changing the batteries. 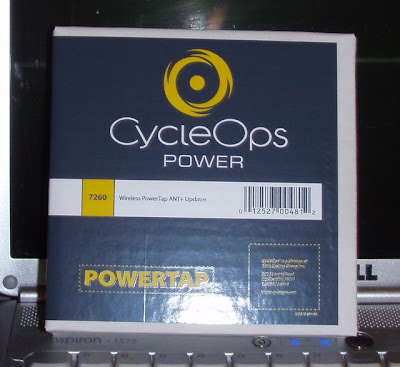 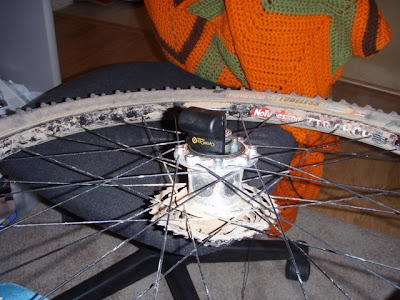 Flip the little switch and red/green LEDs begin alternating inside the unit. 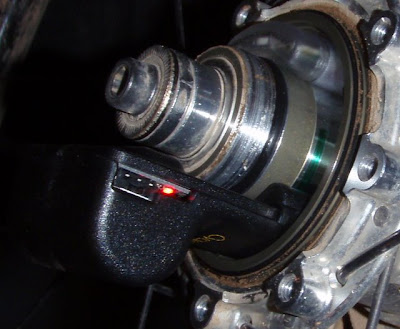 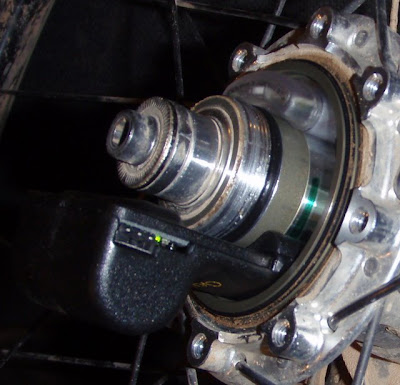 Turn it off.  Remove it, replace the battery pack (great time to replace batteries too), put the new cover on that came with the updater, reinstall the disc and that’s about it.

First time on the bike you may need to relearn the hub.

Now for the gotchas.  Of course there are a few.

I’m using the Garmin 705.  It turns out they decided to filter the raw data stream, likely due to the PT’s aliasing.  The PT calculates power data points at fixed time intervals which basically means that depending on what cadence you ride at, the point to point value fluctuations can be quite large.  Filtering the data stream makes sense for noisy GPS signal perhaps, but filtering the PTs data stream generates bogus data for bursty efforts.  I’ve been in contact with Garmin, they have removed the filter in a beta version that I’ve been testing and so far so good.  I can’t say when it will become publicly available, but it should be very soon.

Zeroing the torque is now a different process.  It is done at the hub and not the CPU, and must be done while the wheel is not moving.  At first glance this doesn’t make a lot of sense as the auto-zero function used to work at zero cadence, but now will need zero speed – and at zero speed how can zero torque be known by the hub?  It can’t.  Ever trackstand at a light, or rest your foot on the pedal?  Time will tell how well this works in practice.

Garmin 705 .tcx file format is a floating target.  Software such as Topofusion and WKO+ that rely on consistent file formats to produce meaningful data interpretations are having a tough time keeping pace.  Your favorite program may or may not work well with the Garmin if you choose to use it.