This season we were pumped to watch #LWAthlete Chris Plesko storm across the country on his single-speed racing the 2,745-mile Tour Divide from Banff, Canada to the Mexican border at Antelope Wells, NM. Chris already owned the SS course record which he set in 2009. This time he finished a phenomenal 4 days faster in 15 days, 8 hours, and 1 minute. We were so pumped watching his tracker during the race seeing how fast and steady he was riding! Here are some words from Chris about his preparation, challenges and race. 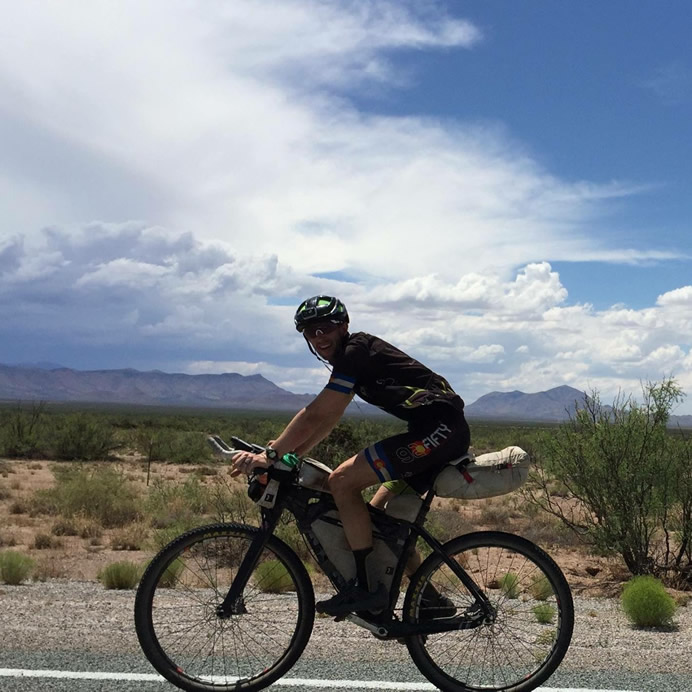 Coach Lynda: You smashed the course record! What was your goal for the race?

Chris: My goal was to dip under 16 days so that I would be faster than Jefe’s 2011 time and Cjell’s border to border runs (both unofficial times). Things went pretty well overall and I finished in 15 days, 8 hours, and 1 minute.

Coach Lynda: When you decided to make a comeback to break your record, was it hard to get started up again?

Chris: I had no major plans to mount a comeback and I wasn’t sure if racing Tour Divide ever again was for me. It’s an incredible race but there are so many other cool things to experience and my 2009 recovery was long. I kept waiting year after year for the record to fall thinking that maybe that would motivate another attempt. It never happened but after some years away from cycling I came back with a fresh perspective. Watching the exciting 2015 race sparked something inside of me and before I knew it other plans were on hold and I was back focused on the Tour Divide. From that perspective it was easy to come back.

Coach Lynda: What was different this time around?

Chris: I’m the father of two young boys now and working as a middle school teacher instead of an engineer. Gone was the free time to train endlessly, leave work at work and travel to chase good weather. Being a teacher freed me to race without constraints but my family and work commitments were intense during my training. On the plus side my situational flexibility has grown leaps and bounds. I’m much better at dealing with little stresses or problems that used to greatly impact my riding. Not to mention that now I’m riding just for myself as an enjoyable outlet with nothing to prove. I wanted to push hard to see just how much I could improve and enjoy the experience.

Coach Lynda: What challenges did you have to overcome in training for Tour Divide and how did you manage them?

Chris: I think time management was the biggest challenge during training. Being a teacher for the entire 7 months of Tour Divide specific training meant I always had some sort of work I had to do. I help coach the East High NICA mountain bike team in the fall and am a middle school basketball coach in the winter. My schedule included plenty of 12-hour work days and I still had a family to be a part of. Fitting all those pieces together meant little extra time for anything else. I would meet my family for lunch on a big ride day, stop home and read bedtime stories before heading back out to finish, or just train late when the boys were in bed. I rode from home in all-weather instead of traveling and never rode the trainer. My cross training was done primarily in my garage. My wife picked up the slack with constant meal and snack prep among a million other things. The entire experience was a family affair.

Chris: For me training with power and using PMC was a total game changer. My knowledge, power band, and pacing made huge strides. I ran Stages power meters on all my bikes and that meant every workout could be executed exactly to plan. There were no days just spent spinning L1 for no reason. I either hit my target goal for power or stress relief or bagged the training and headed home to recover and attend to other things. It also freed me of the worry that I wasn’t doing enough. Power rose all throughout the spring and I never got sick as I felt stronger and stronger. I had complete trust in the plan.

Coach Lynda: Describe how you felt when you finished knowing you had smashed your goal and put together an amazing ride?

Chris: It was an incredible relief to hit Silver City knowing that I had put together a run better than my goal. So many things can go wrong over 2713 miles. I buried myself the final day to get back to my waiting family as soon as possible and taking that border photo in Antelope Wells with Marni, JJ, and Ben was pure joy.

Coach Lynda: What is the most common question you have been asked since you finished?

Chris: I think a lot of people I talk to have no real conception of the day in and day out reality of racing an event like Tour Divide. In addition to the “why single-speed?” question a lot of people want to know where I sleep. I did manage a few indoor nights when the stars aligned but mostly I slept in the nearest safe spot when I could no longer stay awake each night. Usually that was tucked behind some sort of sign or vegetation about 15 feet off the road.

Coach Lynda: What advice do you have for the next single-speeder who wants to break your record?

Chris: Bribe whoever controls the weather! But really, anyone who can break my record probably doesn’t need my advice. Enjoy the training, the self-sufficiency, and each day of the ride. Whenever you can push further, do. I’ll be cheering from the computer screen!

Coach Lynda: Thanks for the interview Chris and huge congrats again on this amazing achievement. Athletes smashing their goals is my goal. Thanks for the great coaching moments!