Build headroom into your season plan

Should you really rest at the end of your season? Won’t that mean you will lose all your hard-earned fitness? Building performance is not linear and you should rest and unload some fatigue after your performance peaks.

Here is why: To build “headroom” for your next season.

The performance manager is a powerful tool when planning out your season. Once you begin training with a power meter and learn the lingo and concepts behind the performance manager you begin to see some obvious trends. One of the more important of these is the concept of headroom, intentionally releasing training load (CTL) in order to make way for the next block of training.

Fitness improves by training at progressively increasing volume. In performance manager parlance rate of training increase is called ramp rate, the rate of change in CTL. A ramp rate of ~4 pts/week produces good fitness gains with little risk of over-training.

There is a catch, of course. There is only so much training you can do, and it varies widely by individual. This is a function of life stress, genetics, training history, age, nutrition etc.

TrainingPeaks recently made big improvements to their annual training planner, read more about it here. It now lets you plan out a season based on weekly TSS or CTL event goals. This new tool was used to create these examples.

Lets look at headroom in action. Our athlete Joe has a CTL ceiling of about 100. Once he hits 100 gains come to a halt and he starts to lose motivation, clear signs he is near his ceiling. It is early November and his first target event is in early March. Joe is also highly motivated after a great fall season and doesn’t feel ready to hang the bike up just yet. Things to keep in mind for his plan leading to the March event are

If Joe starts his plan with no headroom after his fall season, he has two choices. He can cut his ramp rate down so that he doesn’t go over his CTL ceiling, or he can ignore his CTL ceiling. A flat ramp rate can lead to a fitness plateau, so that isn’t optimal. Ignoring a known CTL ceiling is risky business too. Training above his ceiling puts him at risk of overuse injuries and burnout.

Here’s how it looks with a starting CTL of 90 and choosing to keep the ramp rate but ignore the CTL ceiling. CTL peaks at 114, risky territory for Joe. 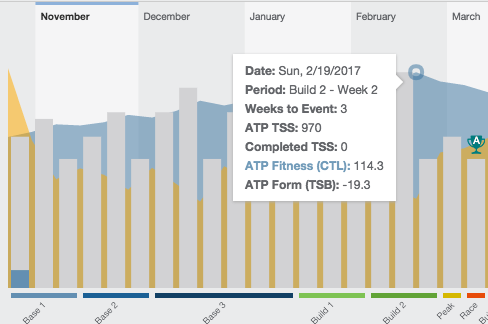 After looking at this Joe decides to cut his riding back for a couple of weeks to let his CTL drop to 60 before he starts up the next season’s campaign. This lets him train at an appropriate ramp rate while keeping CTL within known limits. 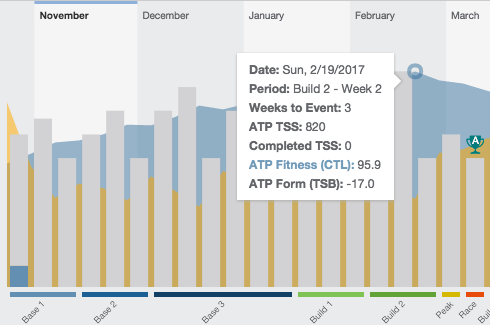 Pre-event CTL peak with a starting CTL of 60

Breaks between training blocks is not a new concept, but by using the performance manager and your power data you can more accurately plan in those breaks. You can answer the tricky question “how much of a break do I really need?”